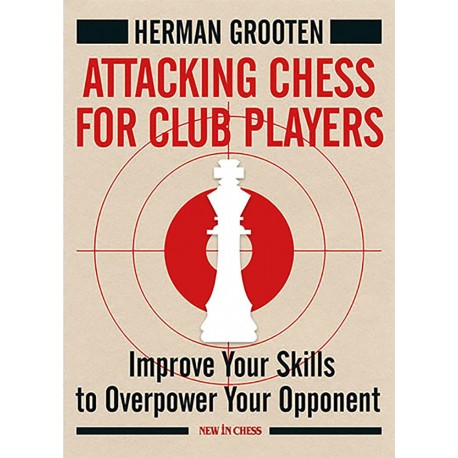 Every chess player loves to attack the enemy King. Your goal is clear, your thinking is concrete, your creativity is flowing and direct victory...

Every chess player loves to attack the enemy King. Your goal is clear, your thinking is concrete, your creativity is flowing and direct victory is just around the corner. Few things in life are better than successfully conducting a blistering attack on your opponent’s King!

But how good are you actually at attacking? Have you ever analysed your efforts? Looked at calculation errors, missed opportunities and derailed efforts?

After the immense success of his award-winning classic Chess Strategy for Club Players, Herman Grooten has now written an equally accessible follow-up primer on attacking chess. He teaches you how to spot opportunities, exploit weaknesses, bringing your forces to the frontline and striking at the right moment.

Grooten concentrates on training the most valuable skills for this process: visualizing, structuring, anticipating, calculating, memorizing and other mental aspects.

This is not just another collection of useful thematic moves and motifs but a complete and highly structured course of attacking techniques. And with fantastic new examples, clear explanations and many instructive exercises.

International Master Herman Grooten is a chess trainer with over 30 years of experience. Several of his pupils have gone on to become grandmasters. His prizewinning Chess Strategy for Club Players was a worldwide bestseller.

GM Matthew Sadler, former British Champion:
"Judging from the title, it shouldn’t really be for me, but I’ve enjoyed it enormously. The standard way of teaching tactical motifs is to set a long series of tactical exercises and hope that repetition leads to the absorption by the student of the required patterns and skills. I’ve done a fair amount of that too in the past, but I’ve always wondered whether it was the most effective way. This book presents the material in a relaxed, easy to read way with surprising examples and little stories that keep you awake and interested throughout."

IM Dirk Schuh, Rochade Europa Magazine:
"I like the structure of the book a lot (..) After simple examples things are getting more difficult step by step (..) A very solid book. Players of any level will be interested in the fundamentals and players of up to 2100 ELO will be thrilled by the more demanding game fragments. The material is often not well-known and Grooten writes very entertainingly, so reading the book is a real joy."

Chris Wainscott, ChessIQ:
"Includes many examples which I feel reasonably sure have not been published before (..) At the end of a chapter the reader is first given a list of bullet pointed conclusions that can be drawn, along wth a set of exercises to drive the material home."