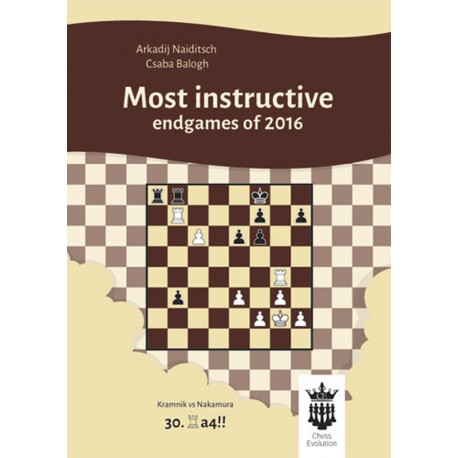 The games are sorted into the following chapters:

We are proud to present “Most Instructive Endgames of 2016”, the continuation of last year’s successful starter “Most Instructive Endgames of 2012-2015”. It was very interesting work trying to select and analyze the 70 most instructive endgames from the past year: the choice was wide and even the simplestlooking endgames have their hidden beauties! We were aiming to find the most instructive, interesting and, of course, useful endgame ideas - those which might also occur in our own practical games.

The main idea behind this book stands out clearly: we try to reduce the importance of endgame table-base analyses or many other forms of computer help, and rather get inside the workings of the best chess-playing brains on the planet, in an attempt to explain the most complex endgames ideas in a way that is simple and understandable to any chess lover. Another very important point of the book which we are proud of is, we have not used much ’engine’ assistance during our commentary on the games. We try to see the game the way we would do in a practical game, which makes the commentaries very special - and which in practice puts the reader fully in the shoes of world-class players; and this is exactly the best way to improve our own chess level.

Sadly, nowadays, we have more-and-more computer analyses and we can even hear chess amateurs judging the play of Carlsen, having analyzed some particular endgame till the very end. Yes, you can make a very deep engine analysis at home - but the question is, can you do the same during your practical game over the board?! Chess is a game where everyone makes mistakes - and this is what it is all about in the current book!

We would advise all our readers to take out a real chessboard and enjoy these beautiful masterpieces. This is how we learned to play chess and this is why we still enjoy every wonderful game, even after almost 20 years of being professional chess players!

Winner of the Dortmund Super tournament in 2005.

Nowadays, many players rely on "computer" evaluations much more than their own "human" understanding. It is fatal to the rise of a chess player?! A chess program should be nothing other than an assistant to our improvement as chess players. This is why, in my view, it is more important to develop our understanding of the chess game - and this can be done most effectively by working with a stronger player. In the current book you have the opportunity to join two super-GMs in their thinking processes, and observing the chess game -as it is-.