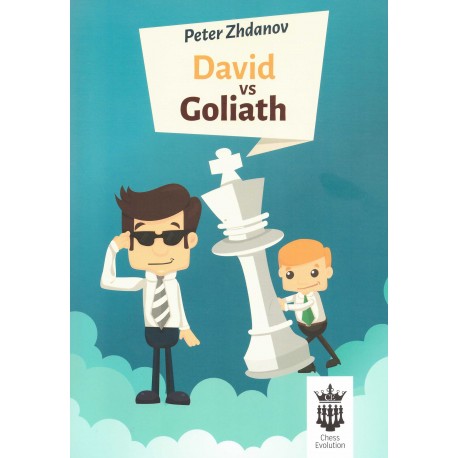 How does an amateur beat a top grandmaster? "David vs Goliath" features 111 remarkable upsets suffered by the likes of Magnus Carlsen, Viswanathan Anand, Vladimir Kramnik, Garry Kasparov, Anatoly Karpov, Mikhail Tal and other chess legends. Inside the book you will find annotadet games, practical tips and numerous puzzles for you to solve.

Peter Zhdanov is the manager of Vice Women´s World Chess Champion Natalia Pogonia and frequent contributor to ChessBase and other major chess sites. Prior to that, he was an IT project manager, a distinguished public speaker, and an expert and author of two books on parliamentary debate. Peter earned A bsC IN Applied Mathematics & Computer Science and also studied for an MA in Economics and a PhD in Psychology, but eventually decided to pursue a career in the chess industry. "Yearbook of Chess Wisdom" (2015) was his debut book for Chess Evolution.

The current book David vs Goliath focuses on an interesting psychological topic, one which most professional players have to deal with on a regular basis when playing in Open events: games against much-weaker opponents, where any result other than a full point is nothing other than a disaster!

Under which circumstances can a much-weaker player beat a far-stronger one in chess? Well, from my own experience I can say that there are many! First of all, we all play with the same pieces; a GM doesn’t have an extra almighty piece! So when a lower-rated player is playing well, suffering no time-trouble or making any other major mistakes, the game is usually pretty unclear. From experience I can also say that not many amateur players actually believe that they can beat a Grandmaster, and of course this lack of confidence stops them from going for a full point - even when the win is very close. There are an enormous number of cases where a GM offers a draw in a completely lost position and the draw offer is actually accepted! On the other hand, most of the wins by the clear underdog occur when the GM overextends his position, doesn’t take the opponent seriously enough or even thinks that basically “any move” is good enough to win the game. A short example on this: Let’s say I am playing in the fi rst round of an open tournament, where it is clear that it is very important to win the first 3 rounds to at least be able to fight for the top prizes, but the position is just equal. What should I do now? In the event that I do nothing “special”, the game will most likely end in a draw - which would ruin my whole event from the very beginning. In this type of situation it is clear that a GM has to take all and any kind of risk to destabilize the position. In most cases the GM wins at the very end - but there are cases when the amateur player finishes with a big smile and says “Thank You”.

In general I do believe that in chess - when the range is not over 400 ELO points - surprises are to be expected, and that the main reason they happen relatively rarely is that most lower-rated players do not believe in their own capabilities of winning a game against a much-stronger opponent. I am absolutely sure that it is possible! In the current book, Peter Zhdanov displays a collection of the biggest upsets which I think should clearly add a lot of motivation and self-esteem for your future games! Yes, it is possible to beat a much stronger opponent, and even the best players in the world are not immortal!