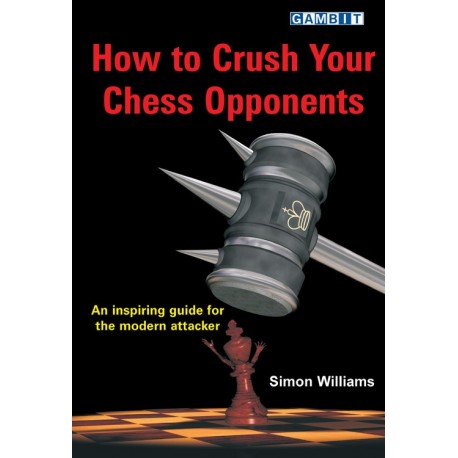 Simon Williams "How to Crush Your Chess Opponents" (K-3006)

Simon Williams, one of Britain's most dynamic and aggressive chess-players, has selected his favourite attacking games from the modern era, and annotated them with an infectious zeal that will inspire and instruct.

Simon Williams, one of Britain's most dynamic and aggressive chess-players, has selected his favourite attacking games from the modern era, and annotated them with an infectious zeal that will inspire and instruct. He takes us inside the decision-making process, explaining how each stage in an attacking concept is formed, and shows how top players spot the signs that indicate it is time to stake everything on an all-out assault. We also get insights into the role of intuition and calculation in both attack and defence.

Simon Williams is an experienced international grandmaster from England who has gained a reputation for playing uninhibited attacking chess. He represented England in World and European Championships in various age groups, and has been a regular in the British Championship since his early teens, an event in which he was runner-up in 2004. This is his third book for Gambit: see also Improve Your Attacking Chess and Play the Classical Dutch.

"Beginners should buy this book for the lucid explanations as to how to form an attack. Strong players should buy it just for pure enjoyment, and for the fact that the diagrams are plentiful enough so as to barely need a board and pieces." - Mark Donlan, Chess Horizons

"There are 30 well-annotated games that are the meat of the book and they are all very entertaining games. ... The annotations to the games elevate some underlying points to the surface, things that many of us fail to realize or simply don't know. Along the way what is delivered is a sense of how to play with the initiative or carry out a plan of attack, aspects that can best be appreciated in the context of whole games. There are several comments in the introduction or at the beginnings of chapters that are not part of the annotations; these carried a lot of weight with me as they resonated with my own thoughts." - Bill McGeary, www.chessville.com

"The annotations are relatively light, but they do focus very much on what is happening in the actual game and avoid long digressions into fantasy land. The emphasis is on the thought and decision-making processes involved rather than the what might have been if something else had been played. I enjoyed playing through the games and found the commentary extremely helpful in understanding what was happening, a comment I do not always find applicable in collections like this. Of course, the winner of each game was usually assisted by his opponent's errors, but those errors have to be spotted and exploited, and that basically is what the book is all about." - Alan Sutton, En Passant

"This is a very nice selection of attacking games, with the emphasis on fun rather than deep analysis and totally correct play." - Sean Marsh, marshtowers.blogspot.com

"At slightly more than 100 pages, How to Crush Your Chess Opponents is a slim volume, but somehow it doesn't seem to be. The pages are fairly large and the thirty games are so packed with informative and entertaining chess, this feels like a much heftier book. Enough diagrams are included that you may not even need a board or computer screen to follow the games. Gambit books have a history of top-notch production and first-rate instruction. How to Crush Your Chess Opponents continues this fine tradition." - Steve Goldberg, www.chesscafe.com

"The author ... is well known for his attacking prowess and ability to get games over with quickly, so he knows all about this form of chess, and you get a revealing insight into his approach via his refreshing and breezy notes. Very enjoyable." - John Saunders, BCM

"Williams sure knows how to crush weaker opponents, as I've experienced myself a few years ago! ... Williams has selected some very attractive games (...mostly from the 21st century), and his notes are both entertaining and instructive." - Peter Doggers, chessvibes.com

"...an impressive collection of tactical slug-fests. Nearly all of the games feature the kind of kitchen-sink attacks that end with spectators crowded around the board. Surprisingly, however, the book has a lot to say about defensive play as well. After all, a defensive inaccuracy is the seed of every tactical firework. ... the collection is unified around a strong central theme: walloping your opponent. ... that's a theme all chess players find appealing." - Josh Specht, ChessVideos.TV