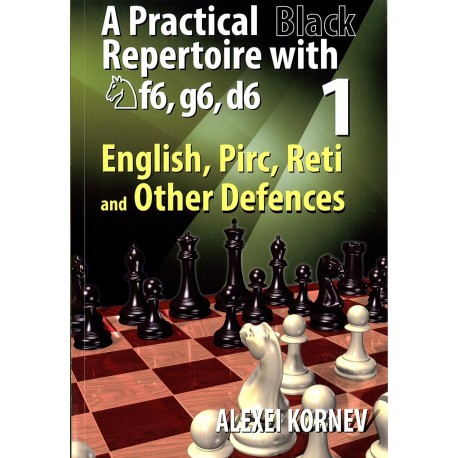 In this volume, we consider the Pirc Defence (Chapters 10-27). It has definite advantages in comparison to other openings. At first, it has not been analysed so thoroughly, since the White fans of 1.e2-e4 devote the lion's share of their time to study the Sicilian Defence and the Open Games.

Secondly, Black can play not only to equalise, but he can also count on seizing the initiative. This is particularly important in tournaments played under the Swiss System in which you must strive for a win irrelevant of the colour of your pieces.

Besides the Pirc, we analyse in the first part of the book all possible set-ups in which White refrains from the moves 1.e4 and 1.d4, namely: 1.f4, 1.b3, 1.b4 (Chapter 1), 1.Nf3 (Chapter 2), 1.c4 (Chapters 3, 4). The second part of the book (Chapters 5-9) is devoted to opening schemes in which White does play 1.d4, but then he does not follow up with c2-c4. This is the Trompowsky Attack (d4, Bg5) and the London System (d4, Nf3, Bf4). In response to these set-ups Black, as a rule, remains true to ...Nf6 and ...g6. The arising opening schemes are similar to the King's Indian Defence (see volume 2), or to the Pirc Defence. This should facilitate considerably the players to master their opening repertoire.