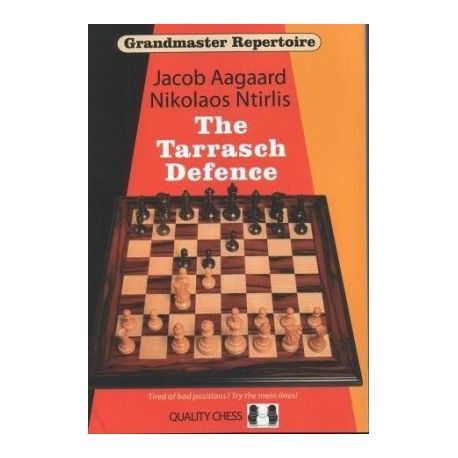 Publisher: Quality, 2011 352 pages, paperback, weight 0,58 The Tarrasch Defence arises after 1.d4 d5 2.c4 e6 3.Nc3 c5 and leads to dynamic play. Based on the variation 9.Bg5 c4, Ntirlis and Aagaard radically change the theoretical landscape for this classic opening, with analysis checked many times over and an ocean of new ideas.

Publisher: Quality, 2011 352 pages, paperback, weight 0,58 The Tarrasch Defence arises after 1.d4 d5 2.c4 e6 3.Nc3 c5 and leads to dynamic play. Based on the variation 9.Bg5 c4, Ntirlis and Aagaard radically change the theoretical landscape for this classic opening, with analysis checked many times over and an ocean of new ideas. Nikolaos Ntirlis is a computer specialist and successful trainer from Greece. GM Jacob Aagaard has won the Guardian, ECF and ChessCafe book of the year awards, as well as many international tournaments. This is his first opening book for 8 years. "Books of this nature are not just about authors doing a good job of collating the material and checking on their computer to avoid missing anything obvious. The authors go beyond the routine. They take the time and make the effort to go just that litle bit further, that little bit deeper. They develop the confidence to challenge the accepted view and supply the analytical proof to present their case with conviction. Boris Avrukh started the ball rolling, and now every one of the Grandmaster Repertoire series authors just has to keep up the highest standards... Many players (I'm thinking about myself!) are a bit touchy about accepting an isolated pawn with Black, but if they get beyond their prejudice they'll find this to be a worthy addition to the best series in chess literature. Put it on the shopping list." GM Glenn Flear, New in Chess "Most opening books are a collection of existing knowledge and a few extra ideas in critical positions. This is not the case with Jacob Aagaard’s and Nikolaos Ntirlis’ (called Nikos) new book on the Tarrasch Defence in the Queen’s Gambit. The book is the result of a large piece of research where the two authors have succeeded in turning completely new pages in opening theory. Before The Tarrasch Defence was published the opening was considered dubious, but now that it is here, all super-GMs have been recalled to the laboratory. All main lines have been repaired, including those no one knew were broken. Have a look: 1.d4 d5 2.c4 e6 3.Nc3 c5 4.cxd5 exd5 5.Nf3 Nc6 6.dxc5! This line has always been considered completely harmless, but it is not and is handled over 37 pages! (Don’t fear – Black will be all right in the end.) The book is ground breaking and sets new standards for the future of opening books." GM Sune Berg Hansen "As usual with Quality Chess books, production values are high and the paper is of an excellent standard. The authors have geuinely tried to unearth new possibilities and overturn existing theory and it will be interesting to see if the Tarrasch Defence enjoys a revival in the near future." Sean Marsh, Chess Monthly "The two authors have done an outstanding job of not only explaining the basic themes and plans that are typical of this opening but also extensively analyzing the theory in detail, offering many important improvements. This book is an important contribution to opening theory and is highly recommended, without reservation." IM John Donaldson "The authors invested an enormous amount of time. The amount of novelties and really astonishing ideas presented here can only mean that they invested hundreds of hours to make this an interesting and really fighting choice." IM Christof Sielecki "The book is primarily written as a repertoire for Black, but, just as with the other titles in the Grandmaster Repertoire series, White will also benefit from studying the recommendations. The authors take the theory of this opening several years into the future with their countless improvements over existing theory and analysis, including several very important new ideas for White... Anyone playing the Tarrasch as black on a serious level, or potentially facing it as white should consider this book a must buy." Carsten Hansen, ChessCafe "The two authors... present so many fresh and fascinating ideas in this old opening that it’s impossible to put down. It’s also a very objective and sensible book, in which the old opening is both treated with respect and is challenged to defend itself against computer-age scrutiny and rigour. I could go on and on about the many beautiful variations in this book, but the truth is that it is crammed with fantastic stuff - really too much to mention in one review. So let me just say that the authors treat the ever-important Timman Variation (9.dxc5 Bxc5 10.Bg5 d4 11.Bxf6 Qxf6 12.Nd5) with due adoration and skepticism (I’ve always felt the line to be both overestimated and underestimated at the same time!). Here, too, they improve existing theory as they go along in many crucial lines." Arne Moll, Chess Vibes "GM10 is highly recommended for very strong players who face the main lines in the Tarrasch often, and for those with the time and willpower to do a lot of memory work. It can be recommended to those above 1600 as a reference work."