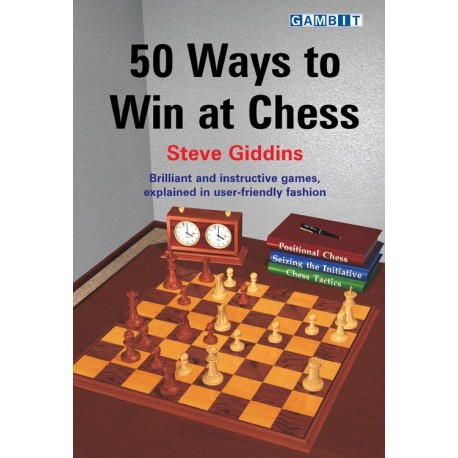 In a sequel to the hugely successful 50 Essential Chess Lessons, Steve Giddins now presents 50 games that each illustrate an important winning method. This engaging and highly readable book is a painless way to build your personal arsenal of techniques and ideas.

In a sequel to the hugely successful 50 Essential Chess Lessons, Steve Giddins now presents 50 games that each illustrate an important winning method. This engaging and highly readable book is a painless way to build your personal arsenal of techniques and ideas.

The games are mostly from the modern era, but with a few classic examples chosen to show key themes in as clear a way as possible. In these cases, the defender may have never seen the critical idea before, and fails to react appropriately. We then move on to more complex examples where the attacker needs to overcome stiffer resistance. Giddins repeatedly shows that despite the tactical complexity of many of these battles, the fundamental concepts can be grasped by all chess-players, and will help them navigate through apparently intimidating terrain.

Steve Giddins is a FIDE Master from England who has frequently contributed to the British Chess Magazine. He has gained a reputation as a writer who provides useful, no-nonsense advice on topics of genuine practical importance, drawing especially upon his familiarity with Russian chess literature and training methods. This is his fifth book for Gambit.

"Giddins explains all the themes very clearly, sometimes at great length, so that every interested amateur player can learn a lot from the book." - Dr W Schweizer, Rochade Europa

"The author of the book clearly demonstrates his enthusiasm for chess." - Gerhard Josten, Rochade Europa

"Most readers will enjoy the instructional clarity in the diligently selected examples, most of which I hadn't seen before" - GM Jonathan Rowson, New-in-Chess

"Steve Giddins is establishing himself as a high quality writer, both in terms of his journalistic output and his book writing abilities. It is not easy to write for a club player audience, but at the same time not sound patronising or deliver material which may be 'over the head' of the average player. It is these qualities which make this book both educationally valuable and a good read!" - Munroe Morrison, Open File

"...a big plus for me was the fact that the book is actually written in such a way that the average chess player at whom it is clearly aimed can readily understand what is going on. There are not too many variations given in the commentary to distract the reader from the game, and the ratio of text to moves is much higher than in many books of this kind, confining itself to the game at hand and avoiding going off at tangents. It makes a pleasant change to find a chess book that you can actually read, and for this reason alone I can recommend it highly." - Alan Sutton, En Passant

"This is especially suitable for club and scholastic players who are sure to benefit from the user-friendly explanations." - Mark Donlan, Chess Horizons

"It's good to see some lesser-known games, including some from English events. At first glance, the exhibition game between David Howell and Vladimir Kramnik might seem an odd choice for deep annotations but it is in fact an excellently chosen example offering a real insight into the secrets of the Berlin Defence." - Sean Marsh, www.chesslinksproject.btik.com