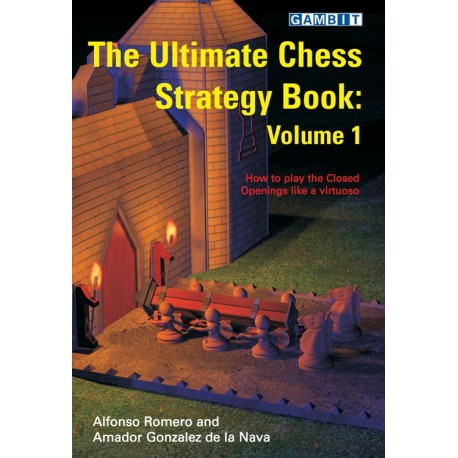 The opening is reaching its end, and we must make a pivotal decision: what shall our middlegame strategy be? Do we seek an active plan to profit from our strengths and highlight the opponent's weaknesses? Or do we adopt prophylaxis, attending to our own position's shortcomings and hindering the opponent's plans?

The opening is reaching its end, and we must make a pivotal decision: what shall our middlegame strategy be? Do we seek an active plan to profit from our strengths and highlight the opponent's weaknesses? Or do we adopt prophylaxis, attending to our own position's shortcomings and hindering the opponent's plans? Alternatively, are there any ready-made plans that we know from other games that can be tailored to fit our position?

The authors present 90 'multi-choice' tests where the reader faces this task. In detailed solutions, they explain the best solution, and why other possibilities are less convincing. We develop a feel for how the decision is made, while painlessly building our 'repertoire' of plans in typical positions.

All the examples in this book arise from Queen's Pawn or Flank Openings, and are arranged by opening and level of difficulty. Many are drawn from games by virtuoso strategists such as Karpov and Petrosian. In all cases, the game is annotated in full, so we see the consequences of the critical decision, while also appreciating the finer points of some of the most instructive games in chess history.

Grandmaster Alfonso Romero comes from Spain and was runner-up in the 1984/5 European Junior Championship. He has represented his country in several Olympiads, winning an individual bronze medal at the 2002 event. He wrote Creative Chess Strategy for Gambit.

Amador Gonzalez de la Nava is a FIDE Master. He is also from Spain, and is a chess teacher and writer.

"If you're looking for serious chess improvement, open the book, set up a problem position on your board (or computer), and analyze it for five or ten minutes. Once you've studied the position and settled on an answer, compare your thoughts with the authors' explanations. Resist the urge to check the answers before you've thought about the position! It might be more fun, but you will not be getting the most out of the book. ... Once you check your answer, you'll discover that the solutions are in-depth. Best of all, the games from which the exercises are taken are provided, with annotations. This is especially nice since the reader isn't left wondering what happens after the move the authors identify as correct. You actually see what happened in the game." - Josh Specht, chessvideos.tv

"It is in the realm of judgment and understanding that players progress up the ladder. One area that is especially difficult for many players is 'closed positions'. Those positions have become the bread and butter of generations of titled players and the bane of aspiring folks in clubs. Ultimate Chess Strategy Book: Vol. 1 attends to the problem with a firmly guiding hand. ... the solutions section makes the exercise much more complete. An explanation as to why or why not a move is made is clearly outlined by a player of GM strength. The remaining portion of the game after the critical position is delivered with some notes that help to hinge back to the critical position." - Bill McGeary, www.chessville.com

"After studying this book you will not become a Grandmaster, but you will surely gain a lot of playing strength. An ideal training book for the ambitious player who wants to increase his knowledge of strategy!" - Martin Rieger, www.freechess.de

"One of those books that truly improves your strategy skills!" - John Elburg, chessbooks.nl

"For players of lower and medium ability, at whom the book is primarily aimed, one of the most difficult aspects of the game is the transition from opening to middlegame, when a plan has to be drawn up that meets the needs of the position. The majority of the 90 test positions presented here fall into that category and are thus helpful for developing the planning side of one's game." - Alan Sutton, En Passant

"The tests themselves take up the first 67 pages and the in-depth solutions cover the next 138. The players' names and game openings are well indexed at the end. There are typically three tests over each two-page spread. The opening notes are very light but the fun starts once the initial phase has reached its end. Each critical position is accompanied by three very tempting choices and the reader is invited to carefully select the best way forward. ... The reader will see that trying to discover the secrets of a quiet looking, generically positional game can just as tricky as attempting to navigate a sea of tactical possibilities. The subtle plans and manoeuvres of a Petrosian can be as instructive as Tal attack." - Sean Marsh, marshtowers.blogspot.com