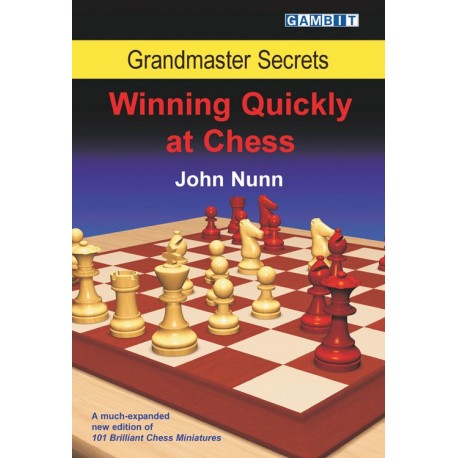 In this tremendously instructive and entertaining work, John Nunn selects 125 of the finest short decisive grandmaster games of the modern era.

In this tremendously instructive and entertaining work, John Nunn selects 125 of the finest short decisive grandmaster games of the modern era.

For a grandmaster to lose a game in 25 moves or fewer takes something special, and club players can learn a great deal from studying these miniatures. Each of these games is a true battle, with the result often in doubt until near the very end of the struggle.

Nunn identifies the most common causes of the errors that lead to the loser's demise, and how one can seek to take dramatic advantage of the opponent's risky or faulty play. In his thought-provoking extended introduction, he explains that in many cases, the problem was of a psychological nature: often the loser fails to accept that events have not unfolded according to plan, and as a consequence steers into the reefs when there was still time to head for safer waters.

Dr John Nunn is one of the best-respected figures in world chess. He was among the world's leading grandmasters for nearly twenty years, winning four gold medals in chess Olympiads and finishing sixth overall in the World Cup in 1989. He is a much-acclaimed writer, whose works have won 'Book of the Year' awards in several countries. In 2004, 2007 and 2010 Nunn was crowned World Chess Solving Champion, ahead of many former champions.

"The reader will have much pleasure and increased knowledge, if he studies the short games intensively." - Richard Brömel, Rochade Europa

"A book that is instructive and great fun" - Thomas Machatzke, Lüdenscheider Nachrichten

"John's new edition book, because of the bite size of the games as well as his well known and respected writing style, makes this a great read. One of the big pluses of this book is the layout. After most of the important moments of the game there is a well placed diagram which makes it easy to read, even without a chess board." - Michael Stevenson, New Zealand Chess

"As much a master in writing as he is in the game itself, John artfully aims to light a spark in the mind of the reader, that will help improve his or her game, rid him or her of a few bad habits, and help spot a few of the opponent and illustrate the correct way to take advantage. It is a book not just to buy and flick through, but to buy with the intention to read from cover to cover. As with any literary gem, to skip any page is to do an injustice not only to the author, but also to oneself for having had the good sense of buying it in the first place." - John Lee Shaw, www.chessgateway.com

"We have all suffered a quick humiliation at some time in our careers and it is somewhat reassuring to learn that our chess role models can fall into the same bad habits that we so often succumb to. Even more reassuring is the fact that from time to time they too can suffer the same humiliation that we feel, but even more so. The bigger they are, the harder they fall! So the book is both entertaining and instructional, though the former aspect by far outweighs the latter. We can take delight in seeing others brought down to earth so abruptly, and we can hopefully learn from their mistakes and avoid repeating them in our own games. Oh, if only!!" - Alan Sutton, En Passant

"Each of the games is recent and they are played by strong Grandmasters. Very instructive." - Paul Dunn, Australasian Chess

"Whoever appreciates a very good games collection and puts a high value on deep analysis will be well served with this book. Well worth buying" - Martin Rieger, www.freechess.de

"The book is intended to entertain as well as educate and there are enough diagrams (in most cases three or four per page) to make it possible to read without recourse to a chessboard. If you are looking for a 'comfort read' during the long winter evenings, this looks like a very good choice." - John Saunders, BCM

"Not only have new games been added, but the previous material has been updated and analyzed at a greater depth than in the previous edition. Also, an introduction has been added that contains several additional games. ... The annotations are diligent, instructive and deep, and there are plenty of diagrams per game." - Mark Donlan, Chess Horizons