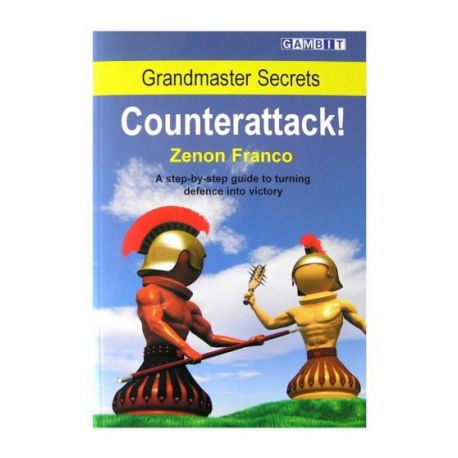 Language: English Publisher: GAMBIT 2009 239 pages, paperback width: 17 cm height: 25 cm weight: 0,500 kg   Superb defensive technique is a hallmark of all great chessplayers. With a few deft counterstrokes, they not only deflect what looked like an overwhelming offensive, but also expose the darker side of their opponent's build-up. Is this sheer black magic, or are these skills that ordinary...

Language: English Publisher: GAMBIT 2009 239 pages, paperback width: 17 cm height: 25 cm weight: 0,500 kg   Superb defensive technique is a hallmark of all great chessplayers. With a few deft counterstrokes, they not only deflect what looked like an overwhelming offensive, but also expose the darker side of their opponent's build-up. Is this sheer black magic, or are these skills that ordinary players can develop? While some of the key defensive skills follow well-established principles, modern players ally them with an appreciation of chess dynamics that is a good deal more subtle. Zenon Franco provides a wide-ranging course in how to handle difficult positions, seeking not only to hold them together but to go on the counteroffensive, exploiting to the full the commitments and concessions the opponent has made to launch his attack. The methods he advocates are varied: often a countersacrifice is the key, while simplification can also be employed as a subtler, but equally deadly weapon. Chapters include: Lasker, the Master of Defence and Counterattack Refuting Premature Attacks Fighting Blow by Blow Regrouping Prophylactic Thinking Simplification Introduction Defence and counterattack are topics very much linked to attack. The writing of this book is there­fore the logical complement to my previous work The Art of Attacking Chess. It is obvious that it is as important to defend and counterattack with dexterity as it is to attack with precision. The best players of all time have mastered both arts. However, there are world champions whose names are strongly associated with defence, like Tigran Petrosian, or with coun­terattack, like Emanuel Lasker. At the beginning of his career another of the great players in history, Viktor Korchnoi, had as his main virtue his great tenacity, the foundation of a successful defence. I remember Miguel Najdorf playing endless sessions of blitz. Sometimes young masters would show him they were decent at­tackers but they didn't defend with the same precision. Then a triumphant Najdorf would say: "He is just an attacking player! He can't defend" and he would prove it. This book has a similar structure to my previous one, and also to Winning Chess Explained. The chapters contain several games illustrating certain strategic topics. The book contains seven chap­ters, whose headings are self-explanatory, but which are briefly described below: Chapter 1, 'Lasker, the Master of Defence and Counterattack', is devoted to four of Lasker's games, where the topics covered in this book are present in a fundamental way. In Chapter 2, 'Refuting Premature Attacks', our topic is the situation where one side must face an attack which doesn't seem to be sufficiently prepared or justified. Chapter 3, 'Fighting Blow by Blow', deals with cases where defence and counterattack are inti­mately related. Chapter 4, 'Regrouping', examines defensive manoeuvring that improves the position of the pieces, which can often form the core of the defence. We shall devote Chapter 5, 'Prophylactic Thinking', to analyse in detail positions where measures are taken before - even long before - an attack is faced, as a preventive measure, or to thwart the reinforcement of the enemy position. In Chapter 6, 'Simplification', we shall analyse the defensive methodology of simplifying and/or giving up material in order to be able to defend and, if possible, switch to the counterattack. Chapter 7, 'Three Memorable Struggles', features three games by three world champions from different ages, which are models of extremely tenacious defence, with multiple defensive resources. Before each main game we shall provide a brief description of it, and within it, or as supplementary games, we shall show examples relating to the main game, to try to understand better whatis going on. Sometimes the supplementary game(s) will come before the main game, if they introduce a key theme that will help explain the events in the main game. At the end of each game we shall re­vise at more length the key moments and the lessons to be extracted from the game. After finishing one or more chapters there will be exercises of varied complexity that feature the topics dealt in those chapters. As is usual in books on the middlegame, the notes take into account those of the protagonists themselves, whether in words or through symbols. I have sought to expand upon and illuminate the players' conclusions, with an emphasis on the topic that is our focus in each chapter. I have also incorporated the insights and corrections of the best current computer programs, as they often high­light unexpected resources in positions that had been considered settled by earlier analysts - we can learn much from these highly tenacious analytical engines! Note that since the analysis has been systematically computer-checked, I have not stated in every case "Fritz/Rybka finds no flaw with this variation", as this would become unnecessarily tedious. Whenever the engines have indi­cated an important improvement, this has naturally been incorporated. But tactical flawlessness is not primary the primary goal of this text - the objective is rather to explain the processes of defence and counterattack, and so to help the reader become more successful in handling these key aspects of chess skill. As in my previous books, at many points you will find questions before key moves; you can simply take them as rhetorical questions - as a stepping-stone to the answers and explanations that appear next - and thus probably learn new things. Alternatively, you can also take them as a challenge, stopping to answer them, and asking yourself "What would I do now?" This way you will get the most out of the lessons from the game. This methodology - taking an active part in the lesson - has been emphatically proposed in the last few years by Spanish author and scientific popularizer Eduard Punset for any sort of learning, although perhaps we chessplayers are already familiar with it. If we are not yet, this could be a good moment to start. I want to finish with a special acknowledgement to IM David Martinez Martin for his always pertinent suggestions and corrections. Zenon Franco