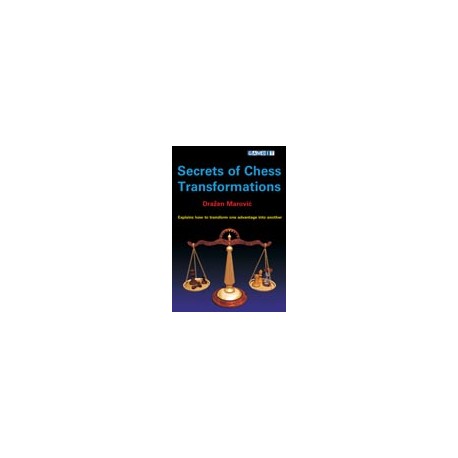 pages: 208 publisher: Gambit Publications Limited One of the most important skills in chess is the ability to transform one type of advantage into another.

One of the most important skills in chess is the ability to transform one type of advantage into another. The great champions effortlessly convert an initiative into an attack, an attack into a material gain, and move into an endgame where this advantage can be exploited smoothly. Readers know from their own games that this is not as simple as it looks. It is all too easy to miss the right moment to make the transformation, and suddenly encounter unnecessary difficulties. In this wide-ranging text, experienced trainer Drazen Marovic discusses all aspects of chess transformations, enabling readers to sense when they are necessary, and to decide how to bring them about. This understanding will also help them to frustrate their opponents' plans, and put up a resilient defence in difficult positions. Topics include: pseudo-sacrifices, sacrificial risks, real sacrifices, counter-sacrifices, development advantage, overextension, and simplification.

Drazen Marovic is a grandmaster from Croatia, who has won medals as both player and trainer for various national teams. Marovic has a wealth of experience as a writer, editor and television commentator on chess. He was the trainer of the Croatian national team during a period in the 1990s when it achieved a number of successes in top-level contests.

"It is an important work because transforming advantages is not easily grasped by tournament players and the Croatian grandmaster explains it clearly and instructively. In a chapter on real sacrifices, he shows how Fischer turned an initiative into an attack, an attack into a space advantage and eventually into a material advantage." - Lubomir Kavalek, Washington Post

"Not an easy book, then, but definitely a rewarding one. The elements of material, space, and time interact in chess to such an extent that strict delineation is impossible, and that certainly shows through in the text. However, this is not really a failing but more a natural reflection of the dynamic complexity of our game. As Marovic himself says in conclusion: 'We should keep in mind that the complex play of transformations is the life of chess, the time of transition and metamorphosis its crucial moment, worthy of players' exceptional attention and dedicated study.' This work stands as a valuable aid towards such study." - Dave Gillespie, Weekend Chess

"And by the way did you know who invented the pawn sacrifice? Than take up this excellent written work from Marovic! Conclusion: A book that is overloaded with killing attacks!" - John Elburg, Chess Mail

"This is not a book for beginners or weaker players, nor is it suitable for light bedtime reading. It demands hard work and concentration on the part of the reader, but could be studied profitably by strong club players who want to become even stronger. The positions are well chosen, and the subsequent play clearly explained, with the author sticking to the point and not straying off into long sub-variations. I found that it gave a fascinating insight into how a world class player views the board, and it has given me much food for thought." - Alan Sutton, En Passant