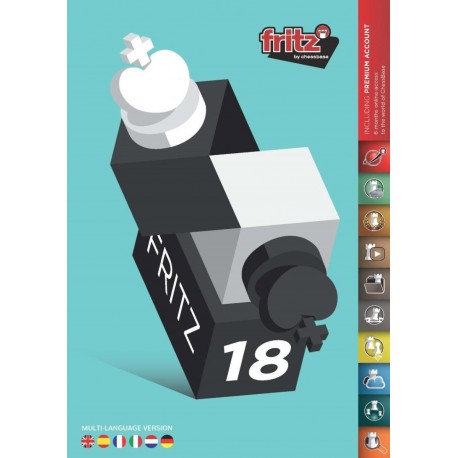 Fritz has fascinated the chess world for 30 (!) years: victories over world champions Garry Kasparov and Vladimir Kramnik, innovative training methods for amateurs and professionals, 20 years of Internet chess on the Fritz server, 10 integrated WebApps for mobile training: Fritz offers you everything you will need as a dedicated chess enthusiast.

Fritz 18 offers you the chance to discover a new you in terms of chess playing. “Evolving Genius” is a completely innovative training method, with which when playing against Fritz you learn more than just to attack. You will be astonished at what you find in yourself! You will never have won such nice games against Fritz! 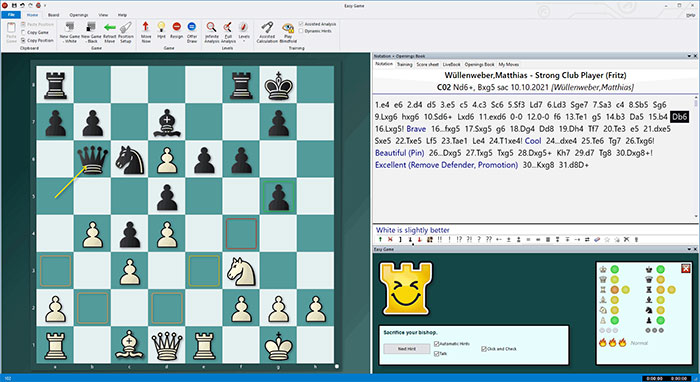 his is possible because Fritz 18 intelligently organises its play and leads you through the game with the help of subtle tips. As soon as Fritz comes under pressure, as a defender it will prefer variations which provide for you, the attacking side, good chances of a sacrifice or other tactic. That often permits spectacular attacking victories. Against Fritz18 you will manage sharp wins such as have not been possible in 40 years of chess programming.

However, the decisive question is the following: how do you bring about the setups in which attacking chances then crop up? Quiet, positional systems more rarely lead to success, although here too Fritz manages to incorporate hidden mistakes. Over time you develop a feeling for how to reach positions in which threats against the king are in the air: you learn to attack better. For myself, at least against Fritz 18 I have switched my repertoire completely from 1.d4 to1.e4. To shorten this learning process for you Fritz 18 contains a repertoire for White with which you can get into promising positions more often.

In general in the “Evolving Genius” mode on the “Club player” level, Fritz does play in a restrained manner, but nevertheless strongly. The games should not be too simple. Nevertheless, it is possible to win very often. For that there are considerably improved subtle hints. You determine the major part of the game yourself, but when you are facing a headwind you can summon help. Imagine an E-Bike: according to how good your performance is you can switch on the support of the motor, but it is still cycling. Examples of subtle hints from Fritz18: “Attack a minor piece”, “Occupy a strong square”, “Threaten mate”, “Win material”, etc.

Users keep on asking us whether the engine output in infinite analysis could not provide more information than only main variations and evaluations. For that reason, Fritz18 now shows a visual representation of important parameters of the position:

This visual evaluation is calculated for the current board position and is instantly available for any move in the notation with a click of the mouse.

If the engine is analysing in multi-variation mode, at the start of the calculation additional information is provided which provides exciting additional insights:

Of course it was also possible previously to access this information with skilled handling. But now it is actively offered and leads to additional ideas and possibly a better understanding of the tactical motifs present. It is not everybody‘s cup of tea to picture in their head long engine variations. In Fritz18 you just hold the mouse pointer over a move in the variation and the relevant position remains on the board until the mouse leaves the area.

The present Windows variations have available with Direct2D a powerful interface for rapid on-screen representations. There was the opportunity to use it to realise a new graphic chess board. The fresh new look of the pieces is obvious, but the new technique allows other subtleties e.g. highlighting the pieces by having them glow or decent animation of captures.