> BOOKS>Openings>Khalifman "Openings with white according to Anand 1. e4 - part 9" 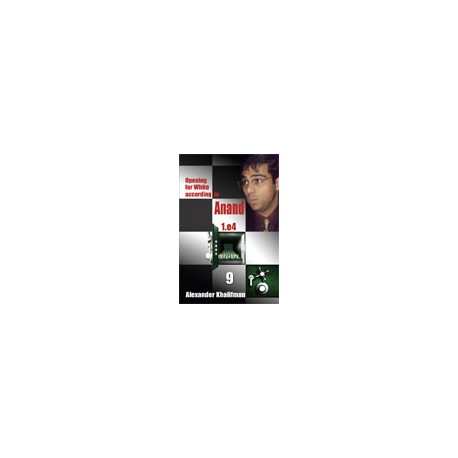 Khalifman "Openings with white according to Anand 1. e4 - part 9"

You are holding in your hands book nine of the series "Opening for White According to Anand - 1.e4". We continue in it the analysis of the Super Opening, which we know as the Sicilian Defence.

You are holding in your hands book nine of the series "Opening for White According to Anand - 1.e4". We continue in it the analysis of the Super Opening, which we know as the Sicilian Defence. In this book, we begin analyzing variations arising after the moves 2.Nf3 Nc6. Meanwhile, it is worth mentioning that in parts 2 and 3 we deal also with systems arising after 2. ...e6. In answer to 2...Nc6, just like after the majority of the basic lines, I recommend the most principled answer for White - 3.d4. In fact, recently, mostly because of Black's successes in the Chelyabinsk variation, many strong players prefer to fight for the advantage with White by playing 3.Bb5, or 3.Nc3. Still, Black usually equalizes in these sidelines. Anand however, is not afraid at all of the Chelyabinsk variation, so we will follow his example. The first part of the book is devoted to some rarely played moves for Black after the practically forced line 3...cxd4 4.Nxd4. If we take into account the fact that from the point of view of common sense we will analyze the "early Dragon" - 4...g6 in one of our next books together with the "true Dragon" variation - then the only moves for Black, which deserve separate analysis are 4...Qb6 and 4. ...e5. The queen-move is quite insidious: experienced Sicilian players use it often with the idea to avoid the comparison of extensive theoretical knowledge. We suggest against it an aggressive plan for White, including castling long and it is not the most popular indeed; nevertheless, it is the most dangerous weapon for him. The variation 4...e5 5.Nb5 d6 - is "the younger brother" of the Chelyabinsk variation and it has been tested even at the highest level. I see no sensible reasons to call that opening system the Kalashnikov variation, although that name is gaining in popularity and it is universally accepted. It is very important to know well the theory of it, but still White can rely on obtaining the advantage. In the second part of this book we begin analyzing variations connected with the order of moves: 2.Nf3 Nc6 3.d4 cxd4 4.Nxd4 e6 5.Nc3. As a rule, the move 5...Nf6 is like an invitation to the Chelyabinsk variation and the game transposes to it after 6.Ndb5 d6. That will be the subject however of our next book, while here we analyze some not so popular replies for Black on move six. After them, as a rule, there arise much simpler positions and White maintains his advantage against all of them. The correct approach here for White is not to go for more than the position can really provide. The variation 5...a6 needs a special treatment by White. Black is trying to play the Paulsen system, avoiding the aggressive plan for White connected with castling long. The number of the adherents to that move-order has increased lately. Still, Black's task in that line is far from easy. There are plenty of new ideas in the principled variation for White - 6.Nxc6 bxc6 7.Bd3 and that enables him to be optimistic for the future. Meanwhile, the pawn-structure in that line is quite specific and that introduces plenty of strategical nuances, so it is essential for White not only to be well acquainted with the theory, but also to understand profoundly the arising positions. Finally, in the third part of our book, we deal with the basic tabia of the Paulsen system: 2.Nf3 Nc6 3.d4 cxd4 4.Nxd4 e6 5.Nc3 Qc7. It is amazing that the peak of interest towards that variation at the beginning of the 21st century is due mostly to Anand, who began to play like that regularly with Black and he had excellent results. His opponents, belonging to the world elite, started gradually to find the antidote to that system and Vishy decided quite reasonably that there were some other acceptable systems for Black as well. The system is still quite popular though. I recommend to White an aggressive set-up, which as we will see later, has become nowadays an almost universal plan in numerous lines of the Sicilian Defence. It includes Be3, followed by Qd2, castling long and a kingside attack. All that is too schematic, since Black has numerous plans at his disposal, but White can rely on obtaining the advantage thanks to our interesting analyses in many variations. In particular, I believe that the principally new idea (11.Qd4!?) in the main line might become the subject of lively theoretical discussions in the forthcoming years. I hope that the new book would help the White players against the Sicilian Defence to create more problems for their opponents and it would help to clarify why the Super Opening is so popular after all. I wish my readers won many beautiful games in the future! A. Khalifman 14th World Chess Champion