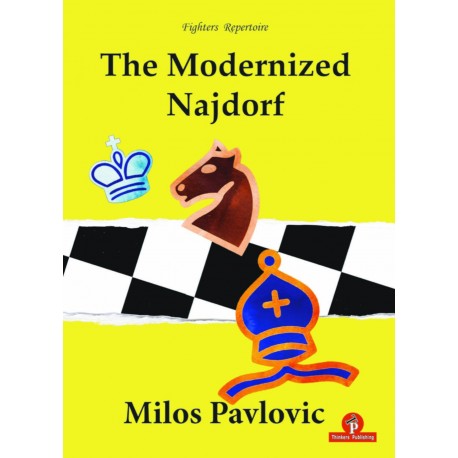 The Najdorf Variation of the Sicilian Defence is so popular that the total number of games played in this line exceeds the number of games played in many complete openings! It has been the favourite line of many world champions and grandmasters. Famous lines such as the Poisoned Pawn, the Polugaevsky Variation, the Sozin, the English Attack, to name just a few, are known to all chess players as belonging to the Najdorf Sicilian.

Championed by young American Bobby Fischer, the Najdorf line gained popularity and with time it became the most popular Sicilian. Even when Fischer lost a game to Spassky in the Poisoned Pawn line during their 1972 world Championship match in Reykjavik, somehow the Najdorf didn't lose its popularity. On the contrary, a new generation of players simply continued to work on the line, with Kasparov in first place and followed by many strong grandmasters.

Perhaps the secret for such popularity should be sought in the amazing flexibility that the Najdorf offers. Often Black can choose between …e6 setups or …e5; even …g6 is often played. You don't find such a variety of ideas in other Sicilians. It is considered one of the top three best lines against 1.e4, the other two being the Berlin and the Marshall, both belonging to the Ruy Lopez opening.

With Black in the Najdorf I have always tried to implement the ...e5 reaction any time I considered it suitable. In Sicilians Black doesn't often have a chance to have a pawn on e5; only in the Najdorf does Black frequently have this possibility at his disposal.
From Kotov, Najdorf himself and Bronstein to Polugaevsky, Fischer, Tal, Gligoric, Portisch, Kasparov, Nunn, Ljubojevic, Timman, these and many others have made serious contributions in this line. Among today’s younger generation Vachier Lagrave and Nepomniachtchi head the many standard-bearers of the Najdorf. It is important also to mention players who contributed with the white pieces: Karpov, Geller, Velimirovic, Anand, Short, and even Fischer himself, who often played the Sozin line. Many others too have been trying to find the ultimate weapon against such a strong line.

Sometimes it is a new positional idea and sometimes a tactical one, depending on players’ styles, but the Najdorf is very resilient and new efforts by one side are countered by new efforts from the other. It just goes from strength to strength. I used to play it with both colours, and that experience helped me to write this book. Going through an amazing number of complex lines, deciding which line to put in this book and which to leave out is a big job but as I analyzed it often from the White side somehow such decisions came easier to me.
Learning the Najdorf will help all players to understand Sicilians in a better way. Different aspects of chess such as defence, attack and sacrifice, positional themes and tactical storms, can be found in my book.