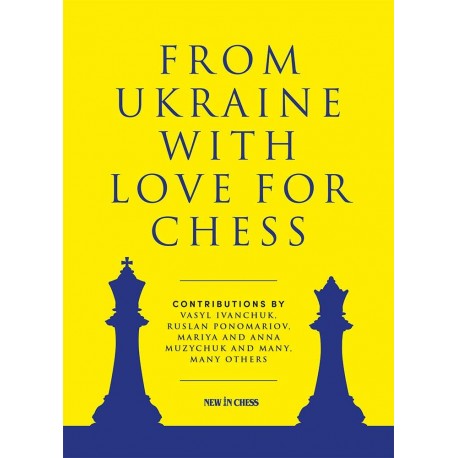 From Ukraine with Love for Chess - Ruslan Ponomariov (K-6119)

With contributions by Vasyl Ivanchuk, Ruslan Ponomariov, Mariya and Anna Muzychuk and many, many others

The Ukrainian chess community is helping Ukraine in the war against Russia. The chess genius Vasyl Ivanchuk is giving online simuls to raise funds. European champion and Olympic gold medal winner Natalia Zhukova is working as a politician in Odessa. And FIDE World Champion Ruslan Ponomariov coordinated this wonderful collection of chess games from Ukrainian players, published by New In Chess. All games were nominated and annotated by the players themselves. The proceeds of this book will support Ukrainian charities.

The book also covers the three legendary Olympic victories by Ukraine, in 2004 and 2010 for the men’s team and 2006 for the women’s team. Oleg Romanishin remembers his training match against Mikhail Tal. And Jan Timman has a look at his favourite Ukrainian study composers.

With contributions by Vasyl Ivanchuk, Ruslan Ponomariov, Anna and Mariya Muzychuk, Anton Korobov, Vladimir Tukmakov, Pavel Eljanov, Andrei Volokitin, and many, many others.