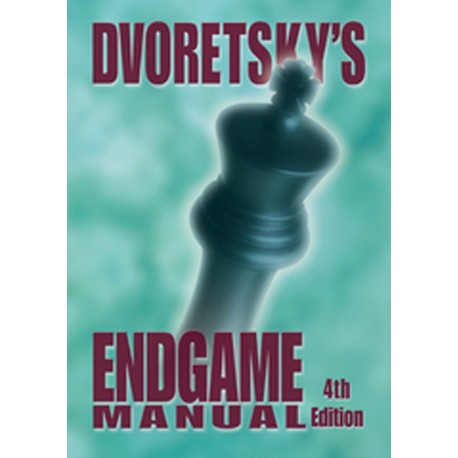 2003 Book of the Year - JeremySilman.com

When you are serious about improving your endgame skills, it is time for .

Perhaps the best known and most respected instructor of world class chessplayers, Mark Dvoretskyhas produced a comprehensive work on the endgame that will reward players of all strengths.

2003 Book of the Year - JeremySilman.com

When you are serious about improving your endgame skills, it is time for .

Perhaps the best known and most respected instructor of world class chessplayers, Mark Dvoretskyhas produced a comprehensive work on the endgame that will reward players of all strengths.

For those ready to immerse themselves in endgame theory, there may be no better manual available today. But, even if you do not play at master level, the book has been designed to help your endgame too.

Basic theories and "must-know" concepts are highlighted in blue. You may skip the more complex analysis, focus on the text in blue, and still improve your endgame technique.

When it appeared in 2003, the first edition of  was immediately recognized by novice and master alike as one of the best books ever published on the endgame.

The second edition was revised and enlarged to over 400 pages - covering all the most important concepts required for endgame mastery.  has continued to re-examine and re-work the material.

The result is this revised and updated third edition. Not only working independently, but also with the help of attentive readers, masters and grandmasters, the author’s efforts have resulted in what can only be described as the definitive work on endgame theory and practice.

is considered by many to be the premier chess instructor of our era. His works on the middlegame and endgame have set the standard by which other chess books are measured. He lives with his family in Moscow, Russia.

GM Artur Yusupov, in his foreword:
"I am sure that those who study this work carefully will not only play the endgame better, but overall, their play will improve. One of the secrets of the Russian chess school is now before you, dear reader!"

Former British Champion GM Jacob Aagaard:
"This book is Dvoretsky's most significant book. It gives the ambitious player a chance to do top level training, but also gives the amateur a chance to see what is really important. If any chessbook can make you a better player, this is it. "

GM Lubomir Kavalek , The Wasington Post:
" ... may well be the chess book of the year... [It comes] close to an ultimate one-volume manual on the endgame."